Blood in the Water: The Attica Prison Uprising of 1971 and Its Legacy 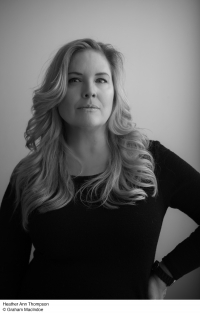 Former UNC Charlotte associate professor Heather Ann Thompson will talk about the historical and contemporary importance of the 1971 Attica prison uprising at a public lecture on Wednesday, Nov. 30. Her book Blood in the Water: The Attica Prison Uprising of 1971 and Its Legacy, is one of five finalists for the National Book Award for Nonfiction.The discussion by Thompson, an award-winning historian now at the University of Michigan, will be at 6:30 p.m. at UNC Charlotte Center City. Doors will open at 6 p.m.

The event is open to the public without charge, but registration is required. Complimentary parking is available at 422 E. 9 th Street, across Brevard Street from the Center City building. Information on how to download a parking permit for the event will be sent later. A dessert reception and book-signing will follow Thompson’s talk. Her visit is part of this year’s programming series called Growing Up Southern: Many People, Many Ways presented by UNC Charlotte’s Center for the Study of the New South. In this 45th anniversary year of the Attica rebellion, the Center, in partnership with the Harvey B. Gantt Center for African-American Art + Culture, takes a look at civil rights and social justice in the New South in an era of mass incarceration. The public is also invited to a reception and book signing at the Gantt Center from 2-4PM on November 30, details here: http://www.ganttcenter.org/calendar/book-signing-with-author-heather-ann-thompson/

On September 9, 1971, almost 1,300 prisoners took over the Attica Correctional Facility in upstate New York to protest years of mistreatment. Holding guards and civilian employees hostage, the prisoners negotiated with officials for improved conditions over four long days and nights. On Sept. 13, the state abruptly sent hundreds of heavilyarmed troopers and correction officers to retake the prison by force. Their gunfire killed 39 men -- hostages as well as prisoners -- and severely wounded more than 100 others. In the ensuing months, troopers and officers brutally retaliated against the prisoners.Ultimately, New York State authorities prosecuted only the prisoners, never once bringing charges against the officials involved in the retaking and its aftermath and neglecting to provide support to the survivors or the families of the men who had been killed.

Blood in the Water (Pantheon Books/Penguin Random House) is considered by many the first comprehensive history of the Attica rebellion of 1971. Called “gripping,” and “remarkable” by the New York Times, Thompson’s book is lauded for having so much to say to the present about racial conflict, mass incarceration, and police brutality. Thompson has written on the history of mass incarceration and its current impact for The New York Times, Time, The Atlantic, Salon, Dissent, New LaborForum, and The Huffington Post, as well as for scholarly publications. She served on a National Academy of Sciences panel that studied the causes and consequences of mass incarceration in the U.S. and has given congressional staff briefings on the subject. Established in 1950, the National Book Award is a literary prize administered by the nonprofit National Book Foundation. Award winners will be announced Nov. 16.